Please filled out Our feedback form..

Guide to a Perfect trip in Egypt!

Siwa Oasis is located near the Libya-Egypt border and is 8km long from north to south. Many small attached oases are linked to Siwa including Garet Om Al Saghir, Al Qattra, Al Bahrian, Satra, and Al Arg from the east side, and Al Lig, Al Maraqy, Om Esha, Dahabeuya, om Al Ghazlan, and Shyata from the west side. The Climate Of Siwa

The climate of Siwa is very cold in the winter, very hot in the summer and moderate in the spring and autumn. The best time to visit Siwa is in the spring or the autumn when the weather is nice and there are a lot of festivals and celebrations in the city.

The History Of Siwa

After Alexander the Great conquered Egypt and took control of the county, he started building his amazing city of Alexandria. When he was in process of building his new city, he decided to visit the worldwide famous temple of the oracle of Amun which is located near Siwa. In 331 AD Alexander and some of his companions and army troops left Alexandria and moved in the direction of Marsa Matruh and then to the north. After some days passing by, the water that they had was drunk and most of the people in the convoy felt horrified and scared. However, on the other day, the sky rained very heavily in this area where it rains very rarely. They were very relieved.

However, after a few days, a sandstorm from the south occurred and Alexander and his convoy lost their way in the desert. Suddenly, two birds appeared in front of them in the desert and Alexander ordered his men to follow these birds saying "these are messengers form Amun." Alexander and his troops found their way to the temple of Amun in Siwa. The temple priests as well as the inhabitants of Siwa didn't know that Alexander was visiting so when they saw him coming they went to welcome him immediately.

The high priest of the temple of Amun allowed Alexander to go inside the inner room of the temple by himself and consult Amun. When Alexander left the temple he seemed happy and satisfied. When his companions asked him about the reason behind his happiness, he said that he would not inform anyone except his mother.

Many historians said that the Persian king Cambyses also wanted to go to Siwa to punish the priests of the temple of Amun because they predicted that his life and achievements would all end painfully in Egypt and the predictions of the priests of Amun turned out to be true after all. When Cambyses started going to Siwa a sandstorm took place and it destroyed Cambyses and all his army which vastly increased the reputation of the accuracy and power of the oracle at Siwa. A lot of history scholars and adventurers dream even today of finding the tracks and proof pf Cambyses or his army that reportedly consisted of more than 50,000 men who all perished in the Eastern Desert.

It is also reported that the most ancient human footsteps in history going back 3 million years were discovered in Siwa in 2007.

The Language And Original People Of Siwa

The people living in Siwa spoke a different language other than the Arabic. Siwians belong to the Berber people who are the original peoples of North Africa west of the Nile Valley and are largely distributed from the Atlantic Ocean to the Siwa oasis, and from the Mediterranean to the Niger River. The people who live in Siwa speak the Siwian language which is one of the variations of the Berber language. Furthermore, some of the inhabitants belong to the Toucouleurs (or Haalpulaar'en) tribe, which is an agricultural tribe who live primarily in West Africa and have impacted the culture of Siwa tremendously eversince ancient times.

Due to the ethnic diversity of Siwa, the oasis has always been linked to the culture of the tribes who live in the Great Desert in the North West of Africa. The Siwa Oasis, along with the other oasis of Egypt and North Africa has always formed a center for camel convoys that used to travel between Morocco and the Nile Valley. Siwa was also influenced by the Senousi culture until Mohamed Ali took control over Egypt and sent his army troops to regain the Egyptian authority over Siwa once again.

The inhabitants of Siwa still adhere to their old conservative habits and customs. The women of Siwa rarely go out of their homes and if they do they have to cover their faces with a traditional Siwa veil which covers the whole face of the woman only with a small opening for their eyes. Moreover, only young unmarried ladies who are less than 17 years old are allowed to go out while married women rarely leave their houses. The men in Siwa wear the white galabeya and even the government employees have to wear this traditional dress code. 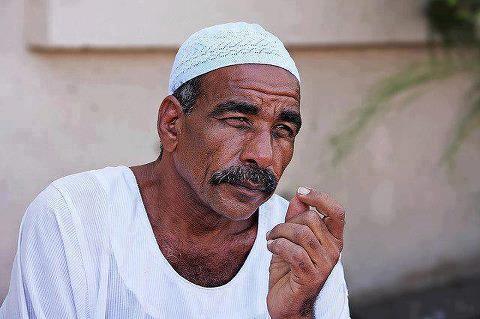 In addition to the problem of desertification, that faces the entire oasis in the Great Desert of Africa, Siwa faces a critical water problem. This is due to the large consumption of underground water that has increased immensely not giving enough time for these water wells to be renewed. The reason behind this increasing consumption of water in Siwa is the huge increase in the cultivation of land. This is in addition to the five mineral water factories that operate in Siwa in filling mineral water.

Another problem that faces Siwa nowadays is the disposal of wastewater for the more than 47,000 acres of cultivated land. This wastewater threatens the cultivating of dates and olives, the most famous Siwan plantations. All the sectors in Siwa have to participate together in order to solve this problem by either demolishing small random water wells or by disposing the wastewater outside the Siwa.

Siwa is famous for its hot, white sand that has some properties that make it able to cure a lot of diseases including rheumatism, arthritis, back pain and spinal pain. Regarding the hot water wells in Siwa, the most important among them are Cleopatra's Bath (pictured below), Arayes, Moulol, and Hamawat. The Cleopatra bath or well is located on the path that leads to the Temple of Amun. It is a water stone pool fed by natural spring water and it is considered the best pool in the area. The water in these wells is divided into two types: normal hot water and sulfurous hot water which is used to cure many skin diseases. It is also used in curing some respiratory problems.  Dakrour Mountain in Siwa contains some hot springs that help in curing rheumatism, polio, psoriasis, and digestive illnesses. Tourists from all over the world come to this mountain in July and August every year to be cured of many health problems.

The City Of Shaly

Shaly is the old city and fortress in the middle of the city of Siwa Oasis. The word Shaly means the city or the town in the Siwian language. Shaly consists of a high plateau with two peaks one at the Eastern edge and the other at the Western edge. On top of this plateau, a lot of houses were built in the "Kashif" style, the ancient construction style in Siwa. In the past, there was a high wall surrounding the city of Shaly to protect it against any outside attacks and this wall had only one opening. The streets of Shaly are narrow and the doors of the houses are very small. The city was designed that way to protect it from the attacks of the other Berber and Bedouin peoples who lived in the desert.  The fortress in the city was built out of mud bricks and it was constructed in the 12th or 13th century to protect the city when there was a situation of chaos in the Roman period. Also, tribes in the western desert used to attack one another in order to get food and drink, so protecting the city was very important.

Aghurmi And The Temple Of The Oracle

The plateau of Aghurmi is where the famous temple of the oracle is located. It is 30 meters above sea level and has the shape of a horseshoe with the eastern, western, and northern parts being quite higher than the southern part. The temple of the oracle was built during the 26th Dynasty, however the Oracle's origin is said to be much older. The most glorious years of this temple were during the reign of the Greeks and the Romans.

What remains of this temple today is one of its ancient walls that contains beautiful drawings and carvings that tell us about the story of the temple, with portraits of the god Amun and another of the god Amun Ra. This temple is famous for the visit of Alexander the Great.

Gebel Al Mawra (The Mountain Of The Dead)

Gebel Al Mawta is located one kilometer outside the city of Siwa. It is a cone-shaped hill that is 50 meters tall. The mountain has a calcareous soil and contains many tombs in the shape of a beehive. They are carved in stone in the form of ranks of successive layers. Each tomb consists of a rectangular corridor that leads to a wide yard with many openings afterward to place the dead bodies.  The mountain has many tombs and the most important among them is the tomb of the Crocodile, the tomb of Miso-Isis, and the tomb of Si Amun (or the man of Amun) which is the most beautiful tomb in the mountain. It goes back to the 3rd century B.C. and it contains remarkable motifs of the god Nut. Unfortunately, most of the tombs of this mountain were robbed during different stages in time. So little remains today for visitors to view .

The Bahariya Oasis is a beautiful stop the northernmostpoint of...

About El-Dakhla Oasis With its considerable amounts of...

Al Farafra is a small oasis located in Egypt's western...

Kharga Oasis is one of the most beautiful places in the world,...

Siwa Oasis is located near the Libya-Egypt border and is 8km long...